NOTE: I am post-dating this to appear while I am on vacation. I saw it the day after Earth Day, before leaving for California & thought it was a perfect follow-up to my Every Day, Earth Day postings because the focus is on food,which my site is all about. The source is www.care2.com. It was sent to me on April 17th, but I didn’t read it until right before leaving for California. es 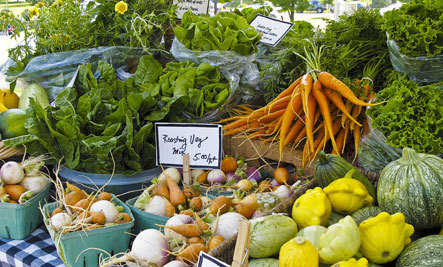 Food is tied to almost everything. It can be the perfect point of convergence for thinking about sustainabilityâ€”because it literally sustains life. Without nourishment, we donâ€™t exist. Here are 10 reasons why I think food is so important, and why I believe we should all care about it and embrace a better system.

1. Gardening Is a Gateway Drug. I feel a powerful mix of excitement, peace, awe and gratitude when I plant a seed and watch it become a plant that becomes my food. This process astounds meâ€”and I love it. If we hope to build a positive wave of environmentalism and a generation of people who are good stewards of the Earth and the living things here, the first step is to plant a seed that helps them care about this place and their connection to it. And planting actual seeds is the perfect recipe. When you touch dirt every day, become familiar with life cycles, and care for living, growing plants, you canâ€™t help but feel a sense of connection. On the whole, there are an overwhelming number of people living on this Earth right now who are profoundly disconnected. They live indoors, they work indoors, their lives are screens, highways and food prepared by a corporation. I think the more people who do something even as simple as growing a tomato plant, the better the world could be. It may start as a tomato, but if the spark of connection grows, one plant could be the gateway to something bigger.

2. Food Grown the Right Way Is Healthier. A basket of vegetables you bought at the supermarket is not equal to a basket of organic vegetables you grew in your backyard. And I donâ€™t just mean the taste. The nutritional value of industrial food has been steadily declining for the past several decadesâ€”so that basket of grocery-store veggies actually has far less nutritional value. Hereâ€™s a big reason why: A field of industrially produced vegetables receives a steady input of water and commercial fertilizers at the soil surface, which in turn leads to small, weak root systems on each plant. Because the plant has no need to grow deep roots to access water deeper down in the soil, it doesnâ€™t (plants only work as hard as they need to). A plantâ€™s root system is where nutrient uptake happens, and a small, weak root system equals nutritionally weak fruits. A further reason is that fruits (tomatoes, peppers, squash, what have you) donâ€™t reach their full nutrient potential until theyâ€™re ripe. In our mainstream system of picking produce unripe so that it can be shipped great distances to end up in a grocery store, the food simply doesnâ€™t have the chance to acquire the nutrients that would have developed during ripening. A third reason is that commercial produce is bred with two main goals in mind: large fruits and high yield per plant. These breeding goals have led to more watery fruits with less nutrient density.

3. Food Can Equal Compassionâ€”or Not. A lot of food offered in grocery stores and restaurants involves torture. Thereâ€™s no denying it. The status quo: meat birds bred to have such large breasts that they canâ€™t walk, laying hens crammed in battery cages being denied their natural instincts to scratch and roost (and occasionally enduring starvation to force molting), mama pigs caged down tightly in metal gestation crates so thereâ€™s no risk of stepping on her piglets, piglets that naturally want to sleep and cuddle with their mother in a â€œnestâ€ sheâ€™d create in nature are instead on concrete and only given access to their mom through a metal cage, calves destined to be veal caged so tightly they literally canâ€™t move or develop any muscle (done to create more tender meat), cattle in filthy feedlots eating grain their stomachs arenâ€™t even meant to process â€¦ this is a beginning of a long, tragic list. By turning a blind eye to this kind of treatment thatâ€™s entrenched in our food production, I think we create a scary, dangerous social ethic. If weâ€™re willing to put up with this, what else are we willing to put up with? Alternatively, for those that do choose to eat meat and dairy, there is a humane,Â respectful way to raise animals for food, and itâ€™s better for the animals and healthier for us.

4. Food Relates to Energy. Energy is one major faction of the environmental movement. Itâ€™s an incredibly important faction, but itâ€™s by no means separate from the issue of food. Most foods are shipped far and wide before they end up on dinner plates. That takes a lot of energy, and so does ensuring that all kinds of produce appear in grocery storesÂ every season of the year. Industrial, monoculture farming is profoundly energy intensive, and the amount of food we waste (Iâ€™ve read some estimates that say itâ€™s as much as 50 percent) means a lot of wasted energy, too. The amount of processing much of our food goes through also takes an enormous amount of energy.

5. Food Relates to Water. Clean water is another aspect of environmentalism thatâ€™s closely connected to food production. Not only do we use a lot of water to produce food, but weâ€™re also harming our water supply through our enormous use of chemical fertilizers, pesticides and herbicides. Because of the huge fertilizer inputs on industrial farms,Â fertilizer runoffÂ flows down streams and rivers and into the ocean. This excess nitrogen in the water creates enormous algae blooms that deplete the oxygen from the water, creating â€œdead zonesâ€ where little else can survive. Concentrated animal feedlot operations (CAFOs), which have their own set of runoff problems, are also disastrous for the water supply.

6. Food Relates to Soil. Top soil is an amazing gift that allows us to grow food, and weâ€™re eroding it year by year through industrial farming practices. Sustainable farming actually enriches and builds soil by the addition of organic matter, whereas todayâ€™s mainstream farming techniques strip the soil of its goodness.

7. Food Relates to Justice. This issue is best addressed with a series of questions: Who has access to fresh, healthy food? Who doesnâ€™t? When a corporation uses workers to apply pesticides to crops or fruit trees, who has to handle the chemicals? How is it affecting their heath? Who decides which chemicals are allowed on our food and creates food policy? How does that relate to lobbying and the flow of money? Whoâ€™s exploited when food comes at an incredibly cheap cost?

8. Food Can Create Communityâ€”or Not. In all my life, I think the times when Iâ€™ve felt the strongest sense of community had to do with food. Whether it was helping at a school garden, working in a community garden, chatting with farmers at my local farmers market, helping a friend can tomato sauce, preparing a group dinner with friends, or helping my neighbor weed her garden, I felt connected, engaged â€¦ and I felt happy. Compare those examples with a typical grocery store experience, when often a machine helps check you out in the self-checkout line.

9. The Current Food System Is Reducing the Planetâ€™s Lifeforce. When I say â€œlifeforce,â€ Iâ€™m referring to the planetâ€™s biodiversity. The diversity of life on this planet is shrinking at an alarming rate, and a huge reason is food. As our food system has evolved and corporations have increased â€œefficiencies,â€ often using genetically modified seed, fewer and fewer plant and animal species are bred and used. Thanks to organizations likeÂ Seed Savers ExchangeÂ and theÂ American Livestock Breeds Conservancy, some rare plant and animal species are being saved, but this issue is still concerning. Another way food production relates to biodiversity loss is simply that a lot of land is cleared for monoculture farming.

10. Food Production Can Empower. In a world that includes war, poverty, apathetic governments, unfair laws, scary environmental problems and countless other issues that cause many people to throw up their hands in despairâ€”and even more people to disengageâ€”food offers a tactile, meaningful way to take control of something. Not every issue works quite like that. For instance, while I care about energy use and greenhouse gas emissions, I may not have the money right now to make the initial investments to outfit my home with renewable energy systems. So I try to use less energyâ€”but that doesnâ€™t feel as proactive or empowering. On the other hand, I have the power to choose to buy organically grown food at a farmers market, grow as much of my own food as I can, preserve excess, cut down on waste, compost, and use only eggs and meat from pastured animals. And that feels great!