I received these email recently and feel they are multi-purposed because they addresses Big Oil, the war in Ukraine, and fossil fuel issues.

I’ll be blunt – Big Oil is screwing us over with high gas prices.

The industry is using the war in Ukraine as a pretext to raise gasoline prices and gouge customers. We shouldn’t have to take that – and we don’t have to.

Tell Congress: pass a windfall profits tax on Big Oil’s ill-begotten gains and redirect that money into clean energy programs or directly reimburse the people of America via checks.

A windfall tax would target profits made by fossil fuel companies in response to the Ukraine invasion, and also tax profits made as inflation has risen. This can discourage oil companies from artificially inflating gas prices and is one of the few things Congress can do to deter this price gouging.

Big Oil has delayed any sort of real action on climate change. They’ve poisoned our communities. Now they’re using the pain and suffering in Ukraine as an excuse to set record-breaking profits and pad the pockets of executives.

Getting Congress to agree on anything is like asking cats and dogs to get along, but there may just be enough outrage over high prices from both sides of the political spectrum that we could see movement on this issue. What’s more, the Stand.earth community is no stranger to accomplishing tasks that other people consider impossible.

We’ve worked to protect millions of acres of forests from extractive industries. We’ve gone up against multinational oil, gas, and coal companies worth billions of dollars and come out victorious, blocking dozens of their projects that would have poisoned local communities and accelerated the climate crisis. We’ve shifted billions of dollars of purchasing from corporate powerhouses like Starbucks, Staples, and Levi’s onto sustainable pathways.

Because of people like you, doing the impossible has kind of become our jam. This community is more than 650,000 people strong (and growing!). Together, we’re using our collective power to fight climate change, protect wild spaces, stand with impacted communities, and say no to new fossil fuels.

As the tragedy in Ukraine continues to unfold, fossil fuel corporations are getting richer, hiking up gas prices, profiting off war, and hurting families.

And today, the U.N. released a new report which revealed that nations are falling far short of reducing climate pollution quickly enough to avoid severe damage, cost, and upheaval.

It’s shameful — and we’ve had enough. 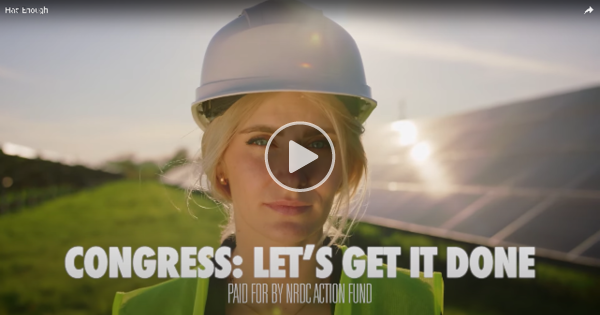 Then, read more about why oil and gas prices are on the rise — and why investing in clean energy is the only long-term solution.

Our job now is to keep the pressure on both Congress and the White House to invest in clean energy at this historical moment when most Americans feel we need a new direction in U.S. energy policy — one that isn’t dependent on dictators and malignant petro-states.

Make no mistake: The reason we were able to run this hard-hitting ad in Washington and across the country is because of the ongoing generosity of NRDC Action Fund supporters like you.

In the weeks and months ahead, we’ll be keeping you updated on the best ways to take action in the fight for our clean energy future — and I hope I can count on you to take action when and where it matters most.

Thank you for standing with us.

P.S. Text CONGRESS to 21333 to make sure you’re getting the latest updates on our climate fight.

Your Signature Is Needed: Protect killer whales from the cruise industry’s corporate greed.